GlutenCHECK is a rapid test for use at home to detect the presence of IgA tissue transglutaminase antibodies (tTG) in whole blood. GlutenCHECK is suitable for an initial diagnosis of gluten intolerance as well as a therapy follow-up. a-tTG-IgA antibody levels should fall when gluten is removed from the diet. After 6 months on a gluten-free diet the antibodies will often become undetectable. The diagnosis must be confirmed by a healthcare professional along with further recommendations to maintain a gluten-free diet.

Each kit contains everything necessary for the test performance: a test cassette, an instruction leaflet, a solution bottle with sample dilution buffer, 1 automatic sterile lancet for comfortable blood sampling, a glass capillary tube, a pipette, an alcohol pad and a plaster. The results can be read within 10 minutes. 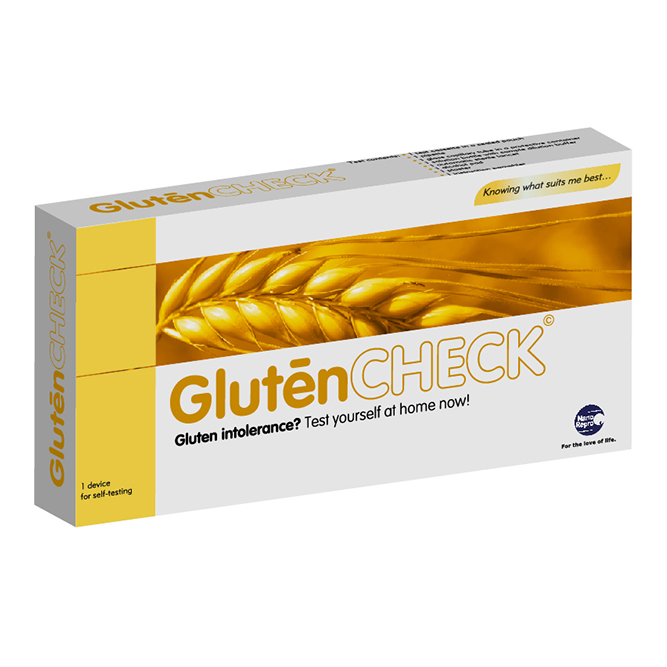 Gluten intolerance (celiac disease), known as a sprue in adults, is an autoimmune disorder of the small intestine when the immune system attacks the body‘s own tissues. The common symptoms of gluten intolerance include bloating and diarrhoea, caused by a reaction to a gluten protein found in many foods. Weight loss, malnutrition and skin disorders could also be indications of gluten intolerance.

Heli-C-CHECK is a rapid test for use at home to detect the presence of Helicobacter pylori antibodies in whole blood. Heli-C-CHECK is intended as an aid in the diagnosis of Helicobacter pylori infection. The diagnosis must be confirmed and treated by a healthcare practitioner. Each kit contains everything necessary for the test performance: a test cassette, an instruction leaflet, a solution bottle with sample dilution buffer, 1 automatic sterile lancet for comfortable blood sampling, a glass capillary tube, a pipette, an alcohol pad and a plaster. The results can be read within 10 minutes. 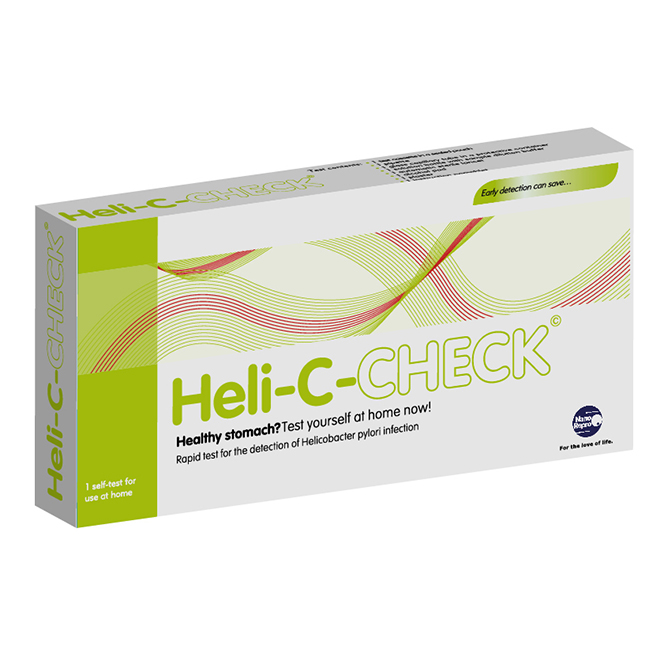 One of the most common causes of painful inflammation of the stomach lining is due to a bacterium called Helicobacter pylori. This leads to frequent abdominal discomfort and nausea. These bacteria colonise the stomach lining and release the enzyme Urease. The stomach tries to counteract this by increasing the production of gastric acid, disturbing the fragile PH equilibrium. Chronic inflammation in the stomach (gastritis) or ulcers may have further consequences. Helicobacter pylori bacteria can contribute to the development of diseases such as ulcers in the stomach and lymphoma progress (a type of cancer).

• Complete test kit with all the necessary accessories.
• Safe & easy test procedure at home with an immediate result.
• Gives information about a potential cause of symptoms before more invasive methods of examination are administered.

TSH CHECK is a rapid test for home use to detect hypothyroidism. TSH CHECK provides a simple, safe and accurate way to measure elevated levels of TSH in the blood. A value above 5 μIU / ml indicates hypothyroidism (normal value 0.4-4.5 μIU / ml). A positive test result is indicative of an increased TSH level and hypothyroidism can thus be assumed. The test uses a reliable cassette test procedure that will help you quickly determine if an elevated level of TSH in your blood is detectable. 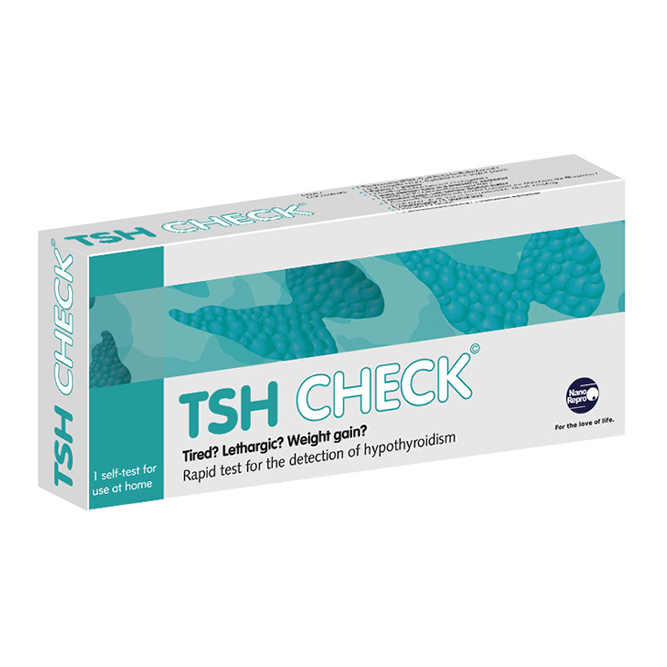 Elevated TSH values are an indicator of thyroid hypofunction. Thyroid hypofunction develops slowly, with increasing symptom strength and a progressing effect on a person’s health. Early stage detection is important to begin treatment in time. TSH reference levels in healthy adults are between 0.4 – and 4.5 µIU/mL, levels above 5 µIU/mL TSH are a strong indicator for hypothyroidism.

• Complete test-kit with all the necessary accessories.
• Safe & easy test procedure at home with immediate results.
• Narrows down the possible cause of symptoms, a doctor can use these results to detect the cause of hypothyroidism and initiate treatment.

• In persons of age (60+), TSH levels can increase naturally without the existence of symptoms.
• The test is not suited for children as their TSH levels can be elevated naturally.

FOBCHECK is a rapid one-step test for the qualitative detection of human haemoglobin in faecal samples. FOBCHECK is designed to help diagnose gastrointestinal disorders and detects human haemoglobin (Hb) with a cut-off level of 40 ng/ml. In addition to possible intestinal diseases such as diverticulitis, colitis, or colon polyps, the blood in the stool sample may indicate an early stage of colorectal cancer. The final diagnosis must be confirmed and treated by a healthcare practitioner. 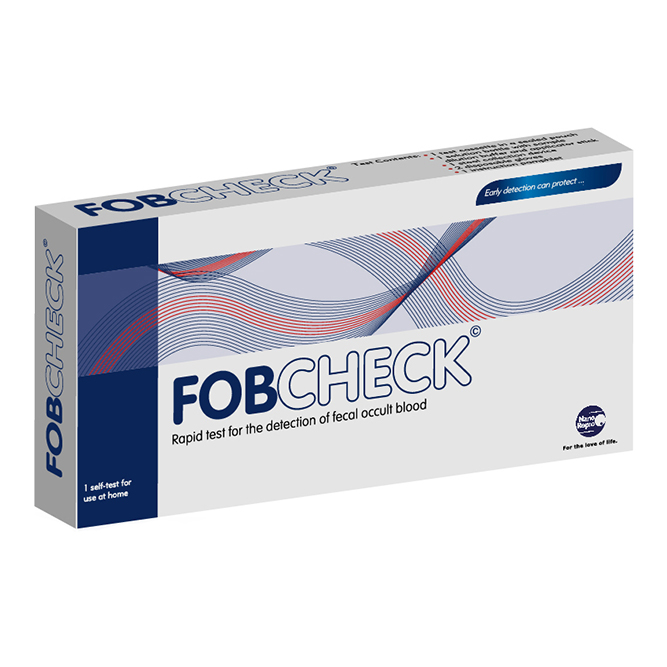 Hidden blood in the stool can be an indicator of various diseases such as diverticulitis, colitis, colon polyps or colorectal cancer. Screening for hidden blood can significantly reduce mortality from colorectal cancer. In the case of a positive test result, further investigation by a doctor is necessary for correct diagnosis and treatment.

• Rapid screening for early detection.
• Minimal sample contact.
• Easy to use.
• Detects human occult blood as low as 40 ng/ml haemoglobin as the threshold level.
• No cross-reactivity to haemoglobin from other species.

Results are accurate and reliable:

Each kit contains everything necessary for the test performance: a test cassette, an instruction leaflet, a sampling tube with developer solution and sample transfer device. The results can be read within 5 minutes.

Each kit contains everything necessary for the test performance: a test cassette, an instruction leaflet, a solution bottle with sample dilution buffer, 1 automatic sterile lancet for comfortable blood sampling, a glass capillary tube, a pipette, an alcohol pad and a plaster. The results can be read within 10 minutes. 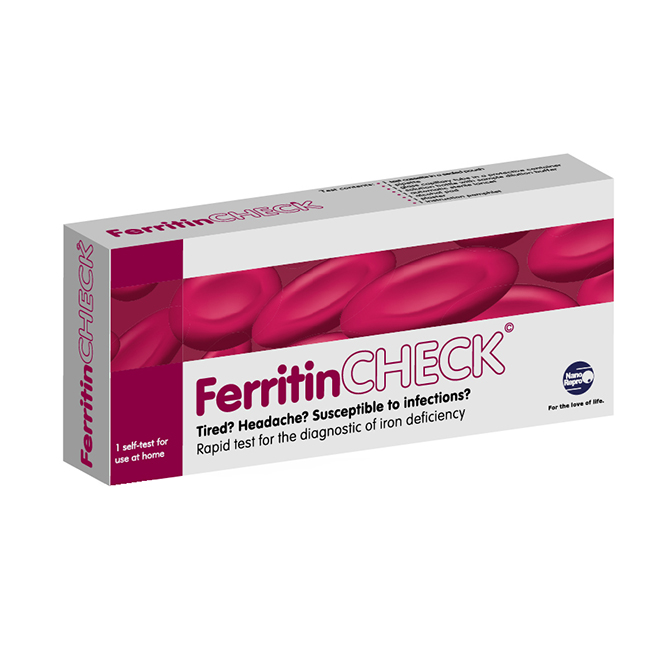 Iron deficiency prevalence is highest among young children and women of childbearing age. It is important that current body iron stores are sufficient. Iron is stored in a protein complex as Ferritin. Hence, Ferritin in the human blood serum is a laboratory marker of the total amount of iron stored in the body. Fatigue, headache, pallor, strong heartbeats or shortness of breath are all possible indications of an iron deficiency.

Athletes, children and women of child-bearing age suffering from headaches, fatigue, or shortness of breath under strain.

FertiQUICK is a rapid test for use at home to detect the concentration of sperm in human semen with 95,1% accuracy.
The self-test shows whether the sperm count is considered within normal limits (at least 20 million sperm/ml). Other fertility factors are not detected by the test. The test uses a test cassette with an antigen-antibody (immunoassay) mode of action. The test results can be read through the appearance of a line in the test field. The package contains all the necessary items needed for the test: a test cassette in a sealed pouch, a solution bottle, a semen transfer syringe, a semen collection cup, a detailed instruction for use. 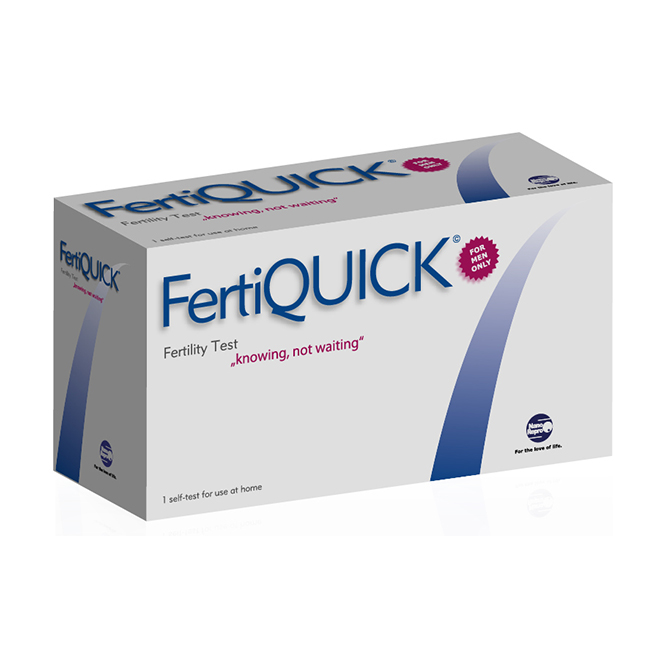 AllergoCHECK® is a rapid test for the detection of allergy antibodies to cat hair, grass pollen and house dust mites. With AllergoCHECK® you can quickly and easily determine if you have increased susceptibility to certain allergies. The test is designed to detect IgE antibodies in the blood.
Each kit contains everything necessary for the test performance: a test cassette, an instruction leaflet, a solution bottle with sample dilution buffer, 1 automatic sterile lancet for comfortable blood sampling, a glass capillary tube, a pipette, an alcohol pad and a plaster. The results can be read within 10 minutes 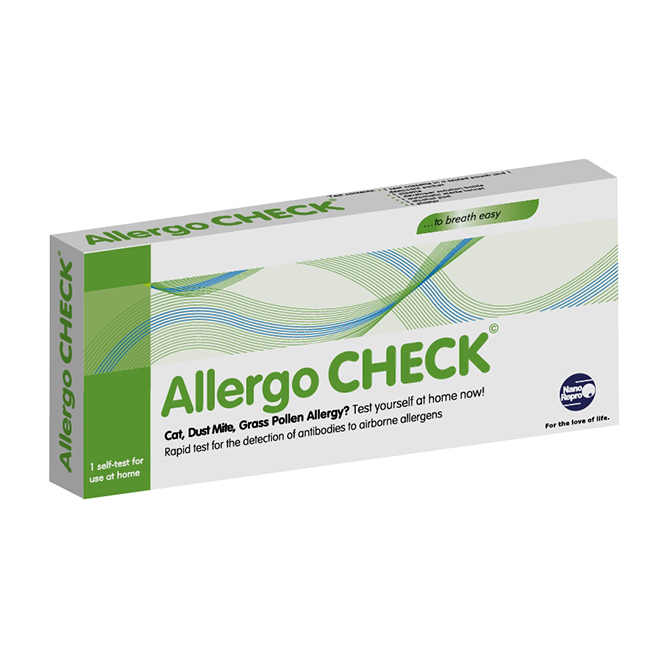 Sneezing, runny nose or itchy eyes are not always the symptoms of a cold. Often it is an allergic reaction to something in the air. There are, among others, three common airborne allergens: cat hair, dust mites and grass pollen. Worldwide, airborne dust causes major problems for people with allergies.
In an allergy, the body‘s immune system reacts to essentially harmless substances from the environment (allergens) through a hypersensitivity reaction. Some of these allergens may be transmitted via the air. In the most common type of allergy (type I allergy), the immune system responds to allergen contact through the formation of immunoglobulin E (IgE) antibodies. If untreated, a persistent allergy to airborne pathogens can induce asthma.

A new stage in life?

MenoQUICK is a qualitative test for home use to detect the status of menopause with 99,9% accuracy.
The test measures the concentration of the Follicle Stimulating Hormone (FSH) in the urine and indicates whether or not a woman has entered into menopause. This knowledge provides the possibility to discuss hormone treatment with a gynaecologist or doctor to evaluate the risk of osteoporosis. 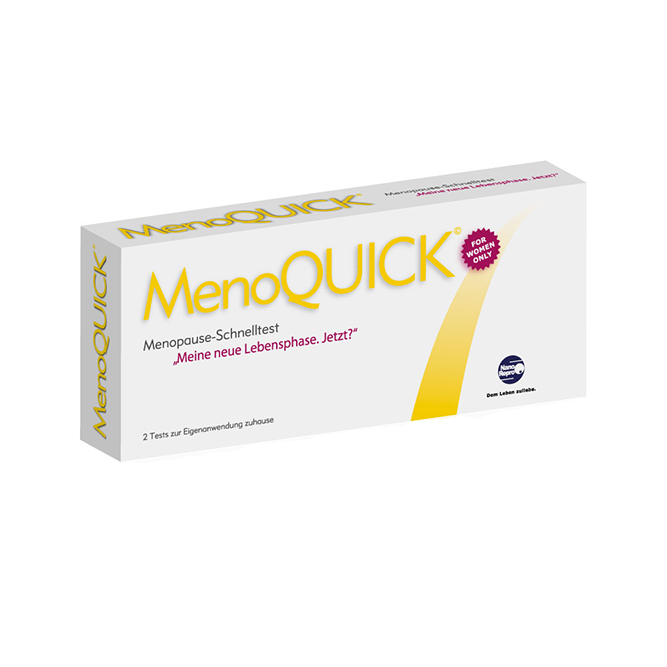 The typical “mature woman” is aged 40 years or older and has completed childbearing. During their late 40’s, most women enter the menopausal transition. This period of physiological change is due to ovarian senescence (the process of deterioration with age) and estrogen decline and is usually completed between ages 51 and 56. Menopause marks a defining point in this transition. Specifically, menopause is defined by the World Health Organization as the point in time of permanent menstruation cessation due to loss of ovarian function. Clinically, the menopause refers to a point in time that follows 1 year after menstruation cessation. The time leading up to menopause is called perimenopause. With ovarian senescence, declining hormone levels have specific effects on many tissues. Some effects lead to physical complaints such as vasomotor symptoms (night sweats, hot flashes, and flushes) and vaginal dryness, whereas others are metabolic and structural changes. These include osteopenia, osteoporosis, skin thinning, fatty replacement of the breast, cardiovascular changes and genitourinary atrophy. As a result, postmenopausal women have specific issues associated with ageing and estrogen loss that may negatively affect their individual health (Hoffman et. al., 2012).

MenoQUICK detects the level of FSH to indicate whether or not a woman has entered perimenopause (the time when the ovaries gradually begin to make less estrogen). If a woman knows that she has already entered perimenopause, she has the option to take the necessary steps to keep her body healthy and to avoid risks involved in menopause (e.g. osteoporosis, rising blood pressure, high cholesterol).

Test yourself at home with our Rapid Diagnostic Tests.

Our self-tests are manufactured by NanoRepro AG, an ISO 9001, ISO 13485 and EC certified German company. Our self-tests cover a range of preventative healthcare and allergy lines as well as family planning.